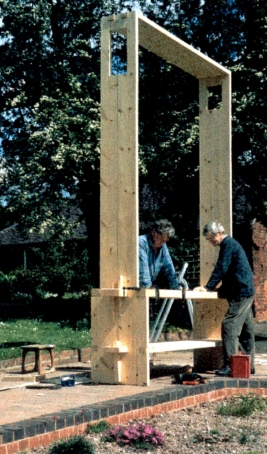 The press under construction 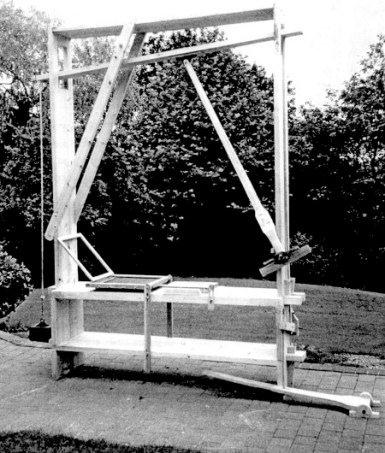 Alois Senefelder invented lithographic printing in 1797 using a mechanism known as the pole press. In 2002 at the suggestion of Professor Michael Twyman, a world authority on the History of Lithography, I reconstructed the Senefelder Pole Press illustrated in Vollstandiges Lebrbuch der Steindruckerey (Munich and Vienna 1818, 1821). The original idea for this was formulated in 1996 and was to construct a press for the Rare Book School at the University of Virginia to celebrate the bicentenary of the invention of lithography. This fell through because the library at the University was being re-organised and there were no rooms available high enough (It is extremely tall).  At this stage the project lost momentum for want of a sponsor and location. Eventually we decided to go ahead anyway as there was much to be learned from having a workable press with which to experiment. The finished press follows the German patent drawings very closely and was erected temporally in my workshop.  Printing trials were undertaken and the results of these were published together with an account of the press’s construction in The Journal of the Printing Historical Society¹. It is also available as a PDF on this site’s ‘Links and references’ page. Sadly for want of a suitable location the press is still here though dismantled. We hope that a place will be found for it in the collection of historic presses at Reading University.

The pole press’s method of applying pressure to the lithographic stone via a scraper forced down by a spring plank, owes nothing to either letterpress or intaglio printing. Had Senefelder ‘invented’ a unique new way of applying printing pressure? For long it seemed so, but two images in Diderot’s Encyclopédie about playing card making, published some years before the invention of lithography, show mechanisms for polishing playing cards which have similarities to the pole press. Both the polishing machines and the pole press are very tall and share the use of a long pole, scraper and spring plank. Senefelder seems to have added the knee joint in the pole and the foot operated treadle, but the similarities leave little doubt that these images were an important source.

Next -The Common Press

Copyright Alan May 2018. This site is free for non commercial use but if you wish to reproduce any of it, please provide a credit.