On this my first common press I had both the spindle and nut machined on a lathe but on the common presses for The Tom Paine Press, The University of Reading  and the two presses for the ‘Outlander’ television series I used the method described by  Holtzapffel. I found it to be quite satisfactory and less expensive than machining.

First, a solid wooden pattern is made corresponding to the dimensions of the finished nut. This pattern is made with its sides slightly tapered so that when pressed into the sand at the casting shop, it can be withdrawn without disturbing the cavity. On its top and bottom faces short wooden dowels are fixed, centred on these faces. Their purpose is to provide registration recesses in the sand mould so that the steel thread can be located accurately in the mould cavity. The thread itself is fitted with similar dowels but made from metal. 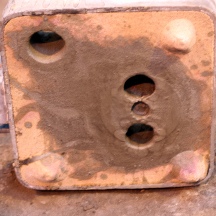 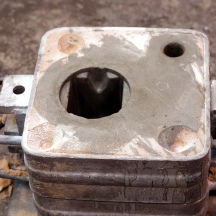 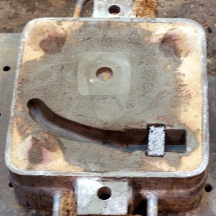 Sand casting is effected by containing the sand in a series of metal frames called moulding boxes. These are stacked one on top of the other to form the mould cavity.  Founders have names for these, the top one is called the cope, the middle one  the cheek and the bottom one the drag. (The drag has a ceramic filter set into it to sieve out any lumps in the melt before they enter the mould cavity). The first to be filled is the cheek. It is placed on a flat surface with the wooden pattern in its centre and a metal tube in one corner. The tube is there to provide a route down through the mould so that the molten metal can run in at the bottom of the mould cavity. The cheek is packed with sand then inverted so that the drag can be located over it and packed with sand too. Next, the cheek is inverted again so that the cope can be fitted and filled. Finally the three mould parts are separated so that the wooden pattern and tube can be removed and the cope and drag hand carved to provide a route into the mould for the molten metal. (the runners and risers). Once the frames are complete they can be clamped together to form the ‘flask’. However because of the need to ensure that the iron thread does not solder itself to the bronze nut, it has first to be coated with a release agent and then heated up by placing it near the metal furnace. Only then can it be inserted into the mould and the three mould boxes locked together in preparation for pouring the molten metal. 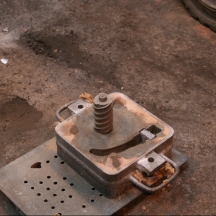 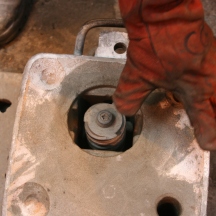 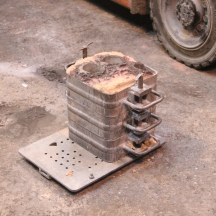 Once the bronze pouring is finished the flask is unlocked and the casting removed from the sand. It is very hot and so is allowed to cool for twenty four hours. Then begins the rather anxious business of separating the bronze from the steel nut. Bronze contracts more than steel so that the two are very tightly locked together. The first job is to make sure that no bronze is overlapping the the ends of the steel nut. If it is, it must be ground away. Next the bronze must be stretched. This is done by vigorously hammering the sides of the nut while being careful not to damage it. To test whether the steel is becoming free it is gripped top and bottom in a G clamp and an attempt made to turn it. If all else fails then a bar of steel can be welded to the top of the screw to act as a lever. The nut is placed in a vice and the end of the steel lever struck with a hammer.

In spite of Holtzapffel’s strictures about this method I have now done this on four occasions and it has always worked satisfactorily. Because the threads are multi-start, before completely separating nut and screw it is a good idea to pock mark both so that you can be sure that the worm on the screw is always offered up to its correct groove on the nut.

Next – Original common presses in Britain

Copyright Alan May 2018. This site is free for non commercial use but if you wish to reproduce any of it, please provide a credit.